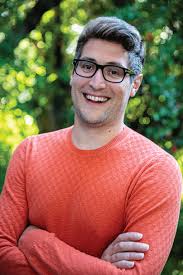 On December 3, 2020, the City Impact Lab welcomed John Erickson, Council Member-Elect, West Hollywood. He spoke to us about the importance of wanting to make change in your community.

By any measure, John is remarkable for his unquenchable passion for change AND his commitments to the organizations that make change happen. As an undergrad at University of Wisconsin-Oshkosh, he stood as a vocal and active ally for campus women’s organizations. He was also the first man to graduate with a Women’s Studies minor and was instrumental in the creation of the university’s Women’s Studies major.

Westward to California—and to becoming a change-maker

Graduate school brought John to California, where he began his work of transforming the knowledge and experience of his college years into activism.

John has been an energetic ally in advancing the mission of NOW.  He was one of the organizers of the 2016 Women’s March and subsequent marches. And today he’s Director of Public Affairs for Planned Parenthood Los Angeles.

Running for office this year was the logical extension of John’s activism—literally becoming “the change that you want to see.”

John shared with the group his three central understandings about creating change in a community:

Find the four legs of your table: the values and causes that make you stand, that keep you stable, that energize you. For John, those four legs are Feminism, LGBTQ, affordable housing, and making sure our communities get exactly what they need.

Find the people you want to change the world with and never let them go. Not only find your community but also your birth family and chosen family. Find your mentors. Find the groups that you care about, and the professional contacts that share your passions for doing good. That support is critical for #3:

Understand the role of leadership in your life. When you find it’s your time to lead, you take the leap. John was a first-time candidate needing to raise thousands and thousands of dollars and then run virtually because of the pandemic. “No one’s going to tell you to step up, to get involved. You just have to do it yourself.”

John exhorted us: “If I can do it, you can do it—I really mean that! No matter what issues you care about, you can do these things.”

John spoke to one more critical element in the process of change-making: “When you share your stories you create change. Share those stories to say and understand why change matters to people. Let everyone have a chance to share their stories.”

Attendees then broke out into groups to discuss the question: “What are the four legs of your table?”

Our thanks to John for sharing his rich experiences and bold vision with us.

City Impact Lab will be back in February. We hope you’ll join us in January for Impact-Makers To Watch 2021.

June 2020: [VIDEO] Tunua Thrash-Ntuk on Advocacy and Action at the Local Level