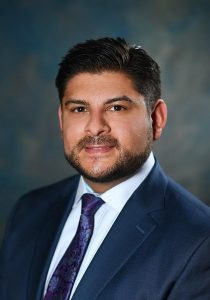 The March 2021 City Impact Lab kicked off with founder John Bwarie reminding the audience that our last in-person event was March 2020. “We’ve gotten through hard things and we’ll get through this.” John welcomed a number of the Impact-Makers to Watch in attendance and then introduced speaker James Alva, Citi Senior Vice President & Market Leader, Community Relations, and Chair of the Board of Directors for Southern California Grantmakers.

James started off by expressing that as we talk of titles and who does what, his titles are things he does, not who he is. He grew up in the San Gabriel Valley with supportive parents who, when expecting the arrival of their first child, James, took on the challenge to also buy their first house and start a new business. Watching them build and operate their business for 36 years impacted his outlook on life. His parents made the most of their limited opportunities improving outcomes for James and now for his infant twin sons.

In the work he does lifting up economically underserved communities, James is committed to sharing tactics that he has lived by in his life of making an impact:

James held up an empty ice cream container to signify how his parents used everyday life activities to teach lessons. On a hot summer day when he was four years old, his parents made a trip to the local Thrifty ice cream counter. His parents let him look at all of the frozen containers where he found his favorite–rainbow sherbet. James’s parents nudged him to tell the nice man behind the counter what he wanted. He shyly looked at his dad and asked him to speak for him. His father’s response was that If you want rainbow sherbet, you have to tell him yourself.

This simple yet fundamental lesson was about speaking up and taking action. If you want something for yourself, you have to do something to achieve it.

As an eight-year-old who was full of questions, James asked his parents about a kid walking down the street wearing a Harvard sweatshirt. “That’s a college.” He continued pressing to understand what college was and soon, Harvard and college were synonymous in his mind and he set his sights on attending Harvard.

While his parents were successful business owners, they never attended college and didn’t have experience navigating college preparation but they knew college would open doors for their son. Along the way people started giving him advice including guidance counselors who thought he should set his sights a little lower. But he kept thinking of that sweatshirt and pressed forward, eventually being accepted to Harvard. Alva showed the hooded Stamford sweatshirt. He chose Stanford and, as he purchased his first college sweatshirt, he thought of the years he had to believe in himself to get there.

While his own effort and determination got him into an elite university, Alva hasn’t forgotten all of the people who helped him get there. Holding up a toy car, Alva’s third bit of advice was “don’t buy the Porsche.” While an automobile worthy to aspire to, it doesn’t hold many people; figuratively, it’s important to have room to bring others along with you in your success and impact.

Through his visual representations, Alva expressed the importance of buying the ice cream–taking action and speaking up for yourself; wearing the sweatshirt–believing in yourself to play the long game; and not buying the Porsche so you’ll have room to bring people along with you.

Audience members asked questions about how nonprofits can work with foundations to which Alva advised teaming up with aligned nonprofits to build innovative proposals that can serve as a model of impact for others.

Attendees then broke out into groups to discuss the question: “How can you bring people along as you make your impact?”

Our thanks to James for sharing his vivid and powerful message with us. And we invite you to join us for our April City Impact Lab, featuring Mark Loranger, President & CEO of Chrysalis. He’ll discuss his work driving sustainable solutions to homelessness and poverty through steady, gainful employment. Get your tickets here.

June 2020: [VIDEO] Tunua Thrash-Ntuk on Advocacy and Action at the Local Level