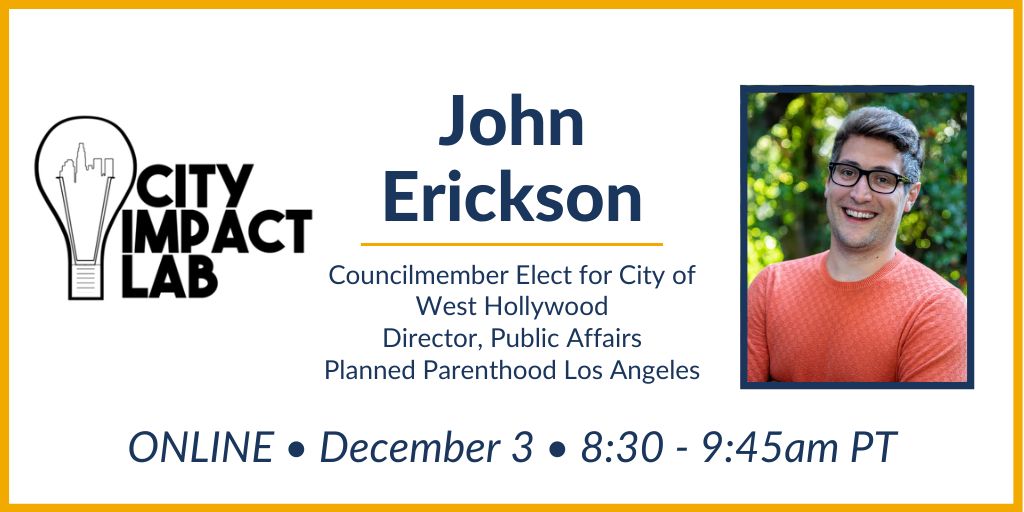 John Erickson is Councilmember Elect for the City of West Hollywood and Director of Public Affairs for Planned Parenthood Los Angeles. Erickson first planted roots in West Hollywood in 2010. While completing his Ph.D. at Claremont Graduate University in American Religious History, he was selected as an intern for the West Hollywood City Council and moved into the city. The internship set him on a path to connect decades of work for social and economic justice with his passion for public service. After the internship, Erickson went on to become Council Deputy to former Councilmember Abbe Land and then the City’s Community Affairs Technician where he worked directly with West Hollywood residents, civic leaders, and organizations across Southern California. At City Hall, Erickson advanced policies and programs to increase awareness around LGBTQ+ rights, women’s rights, the environment, and civic engagement. While at City Hall, served as the President of West Hollywood Municipal Employees (WEHOME) American Federation of State, County, and Municipal Employees (AFSCME) Local Union No. 3339, AFL-CIO. He learned to bring residents and local businesses together so that City Hall works for everyone, to take forward-thinking policies from white paper to law, and to provide exceptional constituent services.

In 2017, Erickson was appointed by Governor Brown to the California Commission on the Status of Women and Girls; serves as the Board President of the ACLU Southern California; and is a member of the West Hollywood Planning Commission where he fights for more affordable housing and smart growth that will keep West Hollywood socially and economically diverse. Among his accomplishments for which he is most proud are the 2016 successful campaign that overturned California’s statute of limitations on rape and sexual assault (End Stature of Limitation on Rape), the historic 2017 Women’s March in Los Angeles, and the #HealMeToo initiative, which connects sexual assault survivors to services in Los Angeles County.

After leaving City Hall, Erickson went on to work as a Legislative Representative at LAX (Los Angeles International Airport), and he currently works as the Director of Public Affairs at Planned Parenthood Los Angeles.

Join your fellow L.A. leaders online for an eye-opening, interactive, and inspiring morning!

City Impact Lab attendees come from all backgrounds, including government, the arts, neighborhoods, nonprofits, and business. Come connect with your future collaborators, mentors, and partners.

Make sure your webcam or phone/tablet camera is ready, as the program is interactive and engaging, which requires all participants to be on screen.

Each City Impact Lab breakfast begins with a presentation from a civic, business, and/or community leader who shares their personal experiences and strategies. We then conduct online activities that draw themes from the presentation and engage attendees on the challenges they are facing in their own work.