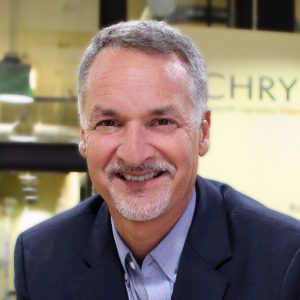 I kicked off our April 2021 City Impact Lab virtual breakfast by introducing Mark Loranger, the CEO of Chrysalis. Chrysalis is a non-profit organization that provides job-readiness programs to those reconnecting to the workforce after experiences with the criminal justice system or with being unsheltered.

Mark talked of growing up in Concord, California, whose claim to fame back then was “last stop on the BART line.” His dad worked hard as a parts manager at a Lincoln dealership while his mother worked and raised the family. He saw it as an unremarkable, normal childhood and didn’t fully appreciate having two loving, active parents. Their involvement annoyed him as a kid but inspired him to make an impact with his life.

His parents had not gone to college and didn’t understand the process so Mark applied only to UC Davis, and, fortunately, was accepted. He studied to be an engineer and moved to the East coast to take a job with IBM after graduation. There, he determined that he liked working with people more than machines and, after eight years  decided to move back to California and became “Mark the Entrepreneur.” He and a business partner launched Takeout Taxi, which was a nightmare of a business, but it was a successful business. He sold it after 13 years and then landed at Chrysalis.

Finding a place to make a difference

Chrysalis helps clients who might have a hard time getting that first job. They hire them and help them understand and learn how to be an employee through their social enterprises. He was hired originally to run the businesses and then had the opportunity to become CEO. Although he was a trained engineer who was somehow managing social workers, it was the best decision of his life, and it became his life’s passion.

Mark then shared four tactics for making an impact:

As a self-described introvert, he had a hard time getting out of his own shadow but found playing trumpet in his high school band provided the needed belonging and sense of community amongst his peers. His band teacher saw something in him and elevated him to the coveted role of drum major. Mark said he wouldn’t have dreamed of taking on the role without the push from his trusted teacher.

This simple yet fundamental lesson was about speaking up and taking action. If you want something for yourself, you have to do something to achieve it.

Tactic #2: It’s all about relationships.

As a sales person, it was trust and relationships because people can buy the same things from anyone else but people want someone to trust and have their back.

People make so many assumptions about homelessness and the justice system. He learned to trust and understand individuals rather than falling into assumptions and judgement.  He looked inward to understand the barriers he had never experienced and, with a better understanding, was able to make an impact on those he served.

Generous, that is, with your time, referrals, and mentorship. Make an impact by connecting people. It’s the right thing to do and helping others means others will help you. There have been times where a funder wasn’t right for his mission, so he would introduce them to another organization that was a better fit. Time is precious and people are always looking for pieces of your time, to seek your advice. Just say “yes.” It’s fun.

Mark emphasized that if people didn’t help him, he wouldn’t be where he is today.

When asked if his four tactics would have been the same before the pandemic, Mark answered that he has been at his organization long enough to have strong relationships and a strong team. If he didn’t have those deep relationships, he doesn’t know if it would have been as successful. In a time of change, constant open communication is important.

When the pandemic hit, he had uncomfortable conversations with his team, whom he trusted. They had to determine what the outcome would be for the 775 individuals working in their programs. It was determined that they were essential and it was the organization’s job to keep them safe. The relationships and attitudes he has learned through his career prepared him to lead Chrysalis to success during uncertain times.

After a lively Q&A session, the attendees were broken into small groups to talk about how they give and receive compliments, and what that means for them in bringing a community together to make an impact.

Our thanks to Mark for sharing his wisdom with us. And we invite you to join us for our May City Impact Lab, featuring Mark P. Smith, Inspector General of the Los Angeles Police Department. With police accountability and reform a current headline topic, we’re looking forward to learning Mark’s perspective and outlook. Join us May 6th!  Get your tickets here.

June 2020: Tunua Thrash-Ntuk on Advocacy and Action at the Local Level