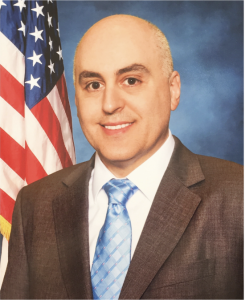 It was my pleasure to welcome Mark P. Smith, Inspector General of the LA Police Department, to City Impact Lab virtual breakfast on May 6.  With issues of police accountability prominent in the headlines, this was one of the most timely discussions in the history of City Impact Lab. We’re grateful to Mark for giving his time to help advance a critically important conversation.

A unexpected career, an outlook grounded in constant learning

Mark started off by recounting a time an influential leader visited his office. The visiting US Attorney shared with him the unexpected path she took to get to her position, and it struck him that it’s okay to not have a specific career goal in mind. He then told his own full circle career journey–one of openness to unforeseen opportunities.

As a Law School student at a summer internship fair, he found himself talking with the representatives from the Los Angeles Police Department, rather than the many law firms in attendance that day. He didn’t have a particular desire to get involved in police accountability and didn’t know exactly what the job entailed, but decided to apply for the internship at LAPD’s Office of Inspector General. He was hired and spent the summer learning and finding a passion for police oversight. Department managers took him under their wing and launched him into an unexpected career.

He spent the next several years gaining experience in a variety of police oversight capacities. From Chicago PD to the Bay Area Rapid Transit (BART), he saw how different offices worked and developed his management style. He returned to Los Angeles to work for the Sheriff’s department as an advisor tasked with finding ways to improve the department.

His path came full circle when a position opened up at the Los Angeles Police Department where he returned to work (his position is independent and impartial) with and continually learned from the managers who got him started.

“You can be empathetic even in an adversarial situation. People are often at odds with the police and disagreements can heat up.  Embarking on a policing career is often based in passion for the work. Maintaining empathy, even when holding the line in conflicts, results in finding common ground to repair what needs to be fixed.”

Tactic #2: Find your own leadership style.

Early on, Mark was preparing to go on stage to make a presentation when someone questioned his choice of tie and if it represented the image he wanted to portray. While he changed his tie then, he learned that leadership styles are personal. His vision of leadership wasn’t about getting attention or looking the part. He wanted to lead talented people.

Tactic #3: If you have a really good boss, stick with them.

And, if you are a good boss, let people stick with you. His bosses invested in his growth and, even after moving to other positions, remained mentors, confidants, and advisors who he could seek out when faced with a difficult challenge. And, when considering career opportunities, if you have to choose between the job you want with a boss who is only so-so, or a less ideal position with a supportive boss who will invest in you, give a thought to the second scenario. His bosses shaped his interests and perspective that have helped him build a career and make an impact.

These tools have helped him make an impact with every turn in his career path although these skills could serve a number of roles.

Audience members were invited to ask questions, which followed up on his role as Inspector General.

What does he need from the public and elected officials to succeed and how does he motivate and instill empathy in those he leads? Mark suggested that staying grounded in the facts and an openness to changing for the better makes his work more successful. His team moves along with him as they define and celebrate victories of all sizes. And, even the most empathetic practitioners sometimes feel strong emotions. Those are the times to step back, take some time to give it space. That is also when trusted mentors and advisors can help regain perspective and return to productive empathy.

Our thanks to Mark for sharing his perspective with us. We’ll be taking June off but will return in July with another community impact-maker from the LA County region.  To stay up-to-date with City Impact Lab, subscribe to Stratiscope Events and Activities.

April 2021: Mark Loranger on the Power of Relationships for Community Impact

June 2020: Tunua Thrash-Ntuk on Advocacy and Action at the Local Level